In June of 2012, twenty-three people came together to discuss the subject of coming off psychiatric drugs. We were psychiatric survivors, therapists, mental health consumers, family members, and activists, united by a passion for truth-telling. More than half of us had successfully come off psych drugs, including cocktails of antipsychotics and mood stabilizers. What resulted from our three-day gathering was an unforgettable meeting of the minds. 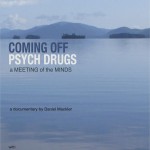 This 75-minute documentary (directed by Daniel Mackler) offers a rare glimpse into the world of coming off psych drugs through the eyes of those who have done it. The film presents, among others, Will Hall, author of the world-renowned “Harm Reduction Guide to Coming Off Psychiatric Drugs,” Oryx Cohen, director at the National Empowerment Center, Laura Delano, blogger at www.madinamerica.com, and Daniel Hazen, noted psychiatric survivor and human rights activist.

Although this documentary is not medical advice, it intends to offer something even better:  hope. In a world where increasing numbers of people are put on psychiatric drugs every day, where more than 20 percent of Americans already take them, and where so many are told they need to stay on them for life, COMING OFF PSYCH DRUGS offers proof that another way is possible.

NOTE:  I have decided to place all of my films on Youtube for free, because I want to share them with the world.  You can still purchase DVDs of the films if you wish, but I don’t want money to stop anyone from receiving their message.  Here’s to a revolution in the mental health industry!

About the Author: Karen

When I started my practice 30 years ago I had focused on mental health following my own challenges with my own mental and emotional well-being. Once I had moved my practice from Galway to Dublin I spent the following 20 years working in women’s health, focusing mainly on fertility and childbirth, and the obvious emotional challenges that emerge within pregnancy and birth. Through the years I have treated anxiety, depression, post-natal depression and all the variations of soul-spirit pain that patients experience in life. However, it was only 5 years ago, when a close family member had a drug-induced psychotic experience, that I embarked on a steep learning curve of the dangers of psychiatric medications. These medications are dolled out to people with little to no consideration of the long term damage to their brains. It is my hope that I can share with you the information, advice and guidance that I have received along the way. Information is power!! I hope to empower you and your loved ones and to know that although people may be in dire emotional pain, there is a way forward to be free of psychiatric medication.

We use cookies to ensure that we give you the best experience on our website. If you continue to use this site we will assume that you are happy with it.OKPrivacy Policy